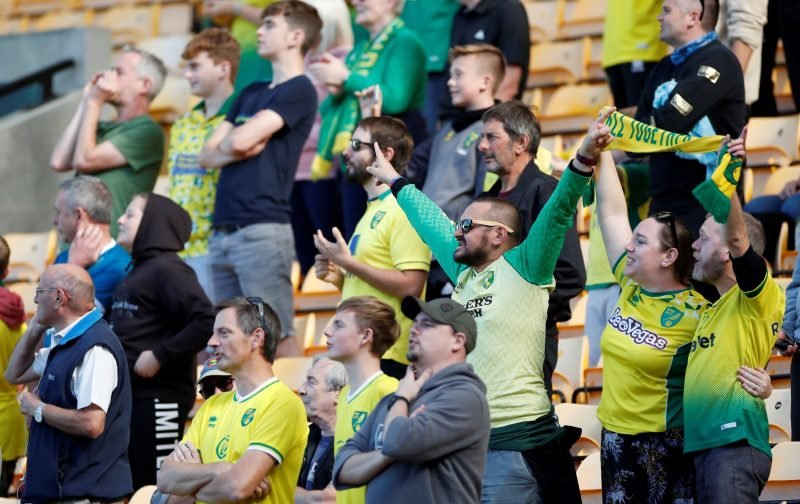 I, like many of you did, put my name in the hat for a ticket for the hastily announced EFL pilot game between Norwich City and Preston at Carrow Road and unlike most of you, I got lucky.

Two tickets for my son and I to attend the first game of the new season at Carrow Road – nice.

Having said that, I will admit to being a little apprehensive about it all. Would the fans behave? Would human nature and one hundred years of being able to go where they like, when they like, ingrained into the psyche, mean that people would forget or simply ignore the restrictions?

There was, I think it’s fair to say, a lot riding on this test for a lot of people. The fans, the club, the EFL and the Government, without whose say so, nothing happens.

We were told to arrive ninety minutes before kick off in order to have plenty of time to get through the new processes. On arrival at the back of the South Stand we joined a short queue and stood on white dots, spaced two metres apart, sprayed onto the ground. As I say, it was a short queue and we were soon beckoned forwards. We had our temperature taken by a steward who welcomed me with a cheery “Welcome back” which was a nice touch and feeling.

The temperature taking was done by a handheld device that never touched me and, having passed, we moved forward to show our photo ID, which was a stipulation of attendance. A quick splash of hand sanitiser and we were inside the cordon of portable steel fences that now  surrounded the club. There was a one way system in operation and we walked towards the middle of the stand where our tickets told us to enter via turnstiles 48-52.

As we did so, we walked past lots of TV cameras and fans being interviewed. BBC, ITV, SKY, they were all there and asking for lots of fan opinions on what they thought of it all. There were lots of masks on, as you’d expect and I kept mine on and my head down as I walked past the cameras. I didn’t fancy a national airing on SKY Sports news later or a local one on Look East, for that matter either.

We stopped at what was previously the Bottle Bar and bought a couple of drinks and a snack, then we stood around for a bit before heading in, just surveying the scene. As you’d imagine, the demographic of those attending was all different. Young, old, middle-aged (ahem), male and female and their children plus a small group of would be football causals.

It wasn’t long before my lad was wanting to go inside, in fact he was desperate. He had a huge smile on his face and I must admit, walking in through the turnstiles and then seeing the (new?) decor inside the stand was cool. The walk up the steps to the stadium though was a lovely feeling.

The sun was bright and the pitch looked like a carpet, absolutely immaculate. The flags fluttered in the breeze on top of the City stand and we were back. It felt like I’d never been away. It also reminded me of my love for football and how much I love the first games of the season, bathed in late summer sunshine. It’s a long-standing pleasant memory that I have and one that I get every summer as the years roll by, there’s just something about it.

The spacing inside was fine. There was nobody in the rows in front, or behind us and nobody within six seats of us. Apart from being occasionally sprayed by a mist of water from the sprinklers on the pitch, I felt safe and comfortable.

Todd Cantwell and Ben Godfrey were standing chatting in the centre circle when we arrived but it was around seventy minutes to go now so we chatted, took photos etc and generally enjoyed a bit of father/son time, which is rarer these days as the boy is a teenager and not always keen to engage with his folks, sadly.

There were hawkers moving up and down the empty rows, selling crisps, hot snacks and drinks, all with contactless payments. It was again, well done and fairly easy. Only at half time did I see folks forget themselves and queue closely, albeit not facing each other, some without masks on, desperate for that half-time pie. I guess you have to give these people the benefit of the doubt and as I said, put it down to a lifetime of that sort of behaviour. It’s hard to change, isn’t it?

The game itself was slightly dull, best summed up as a war of attrition between a team just relegated and with a sprinkling of new players who are still bedding in and a seasoned team of Championship operators, who all know exactly what they are doing. Preston dragged Norwich into the trenches for a fairly physical encounter at times.

My observations on the team were that I like the look of Xavi Quintilla, who took nearly all the set pieces and who has a very good left foot. He is mobile and always up and down the wing, in the mould of a Farke full-back and he was certainly as good as Jamal Lewis might’ve been in the same scenario – he didn’t repeatedly check back either (sorry, Jamal). He also registered an assist for Pukki’s goal. I read some on social media moaning about his defending but it’s still early days and he looks to have all the tools needed for the role.

I have to say that I really like the look of Oliver Skipp. He is going to be an excellent signing, full of running and tackles and with the ability to drive forwards and pick a pass too. I can’t see Alex Tettey displacing him too often in that defensive midfield role. Having said that, Kenny McLean still disappointed. If we’re going to play two players in the “number six” role then both need to be strong and measured in their passing. McLean divides opinion, I know that and it will be interesting to see how Jacob Sorensen fits in when he’s ready.

Kieron Dowell’s game was ended fairly early due to injury and with Preston having the better of the opening 15 minutes, it was hard to judge him. His replacement, Przemyslaw Placheta scored the second equaliser when his initial shot deflected back to him and did well enough, although he did miss an open goal from about ten yards out when Adam Idah’s shot was parried by Declan Rudd. We are yet to really see the new man’s lightning pace though. He did, however, link up well at times with Quintilla on the left and he looks promising.

Preston were workmanlike throughout with Patrick Bauer winning every aerial ball that came near him and but for a cheap penalty and some profligate shooting, plus a great save from Rudd at the end, could easily have lost despite City only playing at around 60-70% of what I would expect from them. There is certainly a lot more to come from this side and don’t forget that Jordan Hugill, Emi Buendia, Ben Gibson and Sorensen are set to come into the thinking of Herr Farke.

Speaking of Gibson, I wonder how long it will be before he replaces Christoph Zimmermann? Zimbo looked a little slow and cumbersome here and was certainly overshadowed by Ben Godfrey on the day.

With the game ending a draw, we were told to stay in our seats and then instructed when to leave by stewards, one row at a time. Outside, we were directed right along the one-way system and into the car park. I didn’t see the bottle neck that others have mentioned, although this sounds like it was quickly resolved by a steward removing the steel fences.

All in all, it was a pleasant experience for my first football match since Spurs away in the cup. The crowd in the ground did their best with creating an atmosphere and my throat is still a little hoarse this morning. You could actually hear people shouting at players, encouragement and otherwise and after one fan shouted to Preston right-back, Darnell Fisher that he should “F*ck off” because he was a see you next Tuesday, the look on Fisher’s face was a picture. He smiled and raised his eyebrows

The walk out and back to my car was painless and so was the traffic, for a change. Ours was the only car in our normal football car park, so this lack of fans business isn’t all bad! We were home in twenty minutes.

Would I go again under these circumstances? Absolutely and I would say that from what I saw, it was a successful trial. The numbers could certainly be increased and hopefully if all four stands are opened, then around 6-9,000 others could be allowed in, safely.

I don’t see the pandemic ending anytime soon, so that may be the best we can hope for in the meantime.