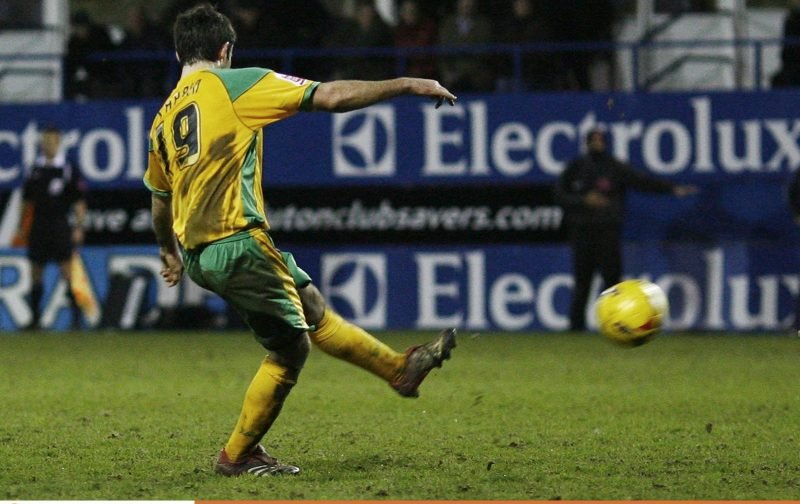 As I’ve been watching Norwich City since 1977, I’ve seen a lot of goals scored by the boys in yellow and green and all of them to some extent, whether they be game winners or late consolations, have meant something to me.

There’s currently a thread on the Vital Norwich Forum about favourite Norwich City goals and it’s really starting to take off, which got me thinking about some of my own favourites. If you read the thread then you’ll see that a favourite goal can become such a thing for just about any reason. It doesn’t have to be a 40-yard scorcher or a spectacular volley, although of course it can be, no, it just has to mean something to you.

One of my favourite goals came at Kenilworth Road against Luton Town in a fairly meaningless game for both sides but to me, at the time, it meant the absolute world.

To understand why, you need to understand my mate Matt who is a vociferous Luton Town supporter. He comes from Luton and let’s be honest, you wouldn’t support the Hatters unless you did, would you?!

Matt is also very chippy about it. He will constantly take the mickey out of anything and anyone and he particularly loves it if Luton Town can get one up on Norwich City. His family moved to Norfolk in the eighties but even at such a young age, white and orange blood flowed through his veins.

This game took place in February 2007 and it followed on in mine and Matt’s football rivalry from the game at Carrow Road in the previous August. A game that Norwich had won 3-2 in a ding-dong affair that saw Darren Huckerby score a header, the only time I saw such a thing, and Robert Earnshaw score and celebrate with that infamous “machine gun” celebration. It also saw Matt, in with the Luton fans, given a public order warning by a Police Officer as a result – hilarious.

Now though, it was the away fixture and both teams were in relegation trouble.

Norwich were managed by Peter Grant and looked a shadow of the team that were playing Premier League football under Nigel Worthington just two years before. It was a team that contained Huckerby, Earnshaw, Gary Doherty, Dickson Etuhu, Youssef Safri, Jason Shackell and, of course, Simon Lappin. City were just three points above the relegation places at this time and Luton were only one place above the bottom three in 20th place.

Luton were managed by Mike Newell, in the days before he made those comments about women officiating football matches. Anyway…

Matt offered to drive and me, him, and a couple of other mates all piled into his black Fiat Punto for the trip. I’d never been to Luton before and haven’t bothered going back since. It is, let’s say, rather down at heel, which might be a tad kind for a town once voted the worst in the country.

We parked up and headed to the ground and the thing I vividly remember was walking through an arch in between a row of terraced houses to get into the ground. As I walked up the steps, I could see into people’s back gardens and houses. I remember a woman doing her washing up as the crowd walked past.

The ground itself is a proper throwback. It is small and very compact with those slightly bizarre looking chalet type boxes taking up one side of the ground. The away fans (us) were stationed behind the whole of one goal and I could actually see Matt and his mate to our right in the first row of the upper tier of that stand. I’ve no idea what these stands are called.

The early exchanges in the game made it tough to watch for the travelling Canaries. Luton were the better team and took the lead. Pulling all the strings for Luton was home favourite, David Bell, later to become a Canary and on-loan Watford midfielder, Matty Spring. Luton and Watford are arch rivals but that doesn’t matter when someone turns out to be a good player, obviously.

There had been a 15 minute delay to the kick-off due to an electrical failure at the turnstiles, although it seems in my memory that there wasn’t anything electrical going on, just a man with his foot on a pedal!

Norwich went behind, David Bell catching Etuhu in possession and beating three(!) defenders before crossing for Bjorn Runstrom to score. Chris Martin equalised after Spring gifted him the ball, allowing him to stroll forward and shoot past Marlon Beresford in the Hatters’ goal and it was level at the break.

Each time a goal was scored I would catch Matt’s eye and exchanged hand gestures with him.

Luton re-took the lead after the break via more good work by Bell and Drew Talbot outjumped Shackell and Doherty to head past Paul Gallagher. I looked at Matt, he was going mental.

Earnshaw was out injured and we’d been struggling to score goals. By the season’s end, it was Huckerby’s goals that had kept us up but tonight it was Shackell, who headed Safri’s free-kick home to level the scores on 73 minutes. It was, I’ll concede, against the run of play again and when I looked at Matt he just stuck his fingers up at me – Ha!

I’d have taken that. A 2-2 draw away from home but there was to be late drama and a goal out of the top drawer to settle it in Norwich City’s favour.

Deep into time added on, Lee Croft was fouled by Matt Spring allowing Lappin one last effort at goal. He was 20 odd yards out and it was at the opposite end of the pitch to the Norwich fans. Hearts in mouths and all that, with 94 minutes on the clock.

The King of Spain stepped up and curled a sumptuous effort past Beresford and the away Canaries were chirping. Once the craziness had calmed down, I looked towards Matt. He wouldn’t look at me but I could see by his face that he was furious, absolutely furious. 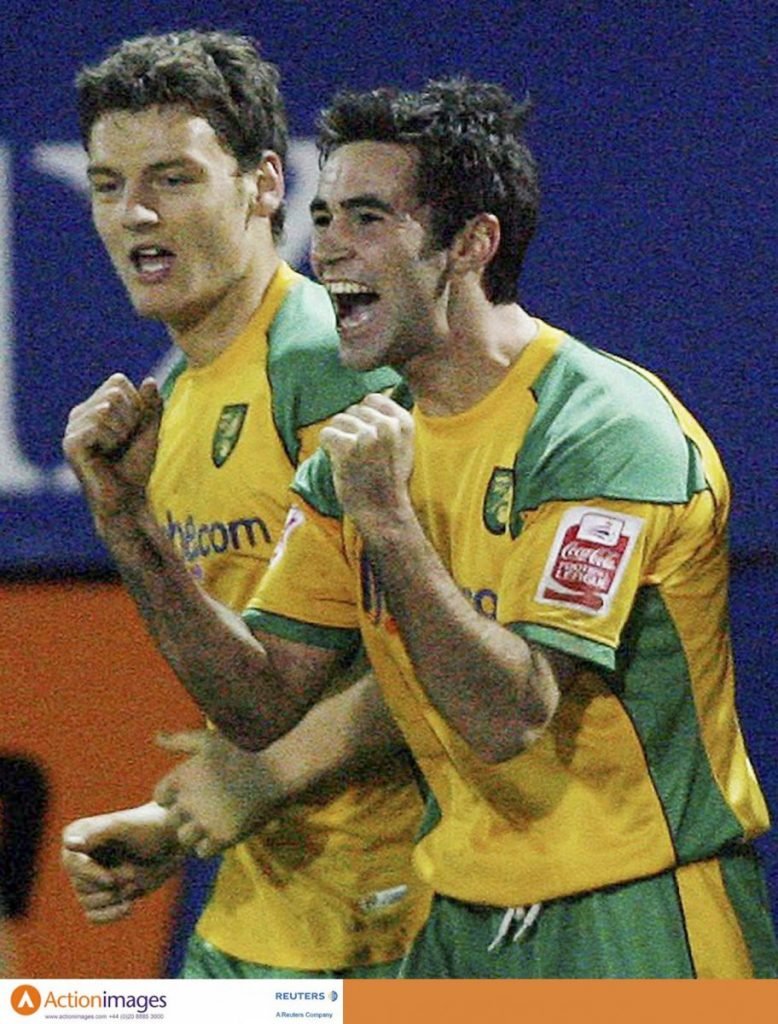 There was just about enough time to kick-off again before the final whistle blew and we went mental again.

Meeting up with Matt outside and, strangely, he wasn’t so chippy as usual. We headed back to the car with some angry Luton fans throwing a bottle in our direction, Matt shouted “I’m Luton, you tw*ts”, to which there was a mumbled apology and then we were driving back towards Norfolk.

The talk of the car was lively from me and the other Norwich fan, quiet from Matt and his mate, with me promising not to mention this moment more than once a day for the rest of his life.

Ultimately, this was not a crucial game. It was only three points in what turned out to be a desperate, turgid season for Norwich City. We finished 16th on 57 points, while Luton were relegated along with Southend and Leeds United, who finished rock bottom. Roy Keane’s Sunderland were Champions and Birmingham went up in second place. Derby were to win the playoffs and Norwich lost Earnshaw to the Rams the following summer. He ended up becoming part of the worst Premier League side ever and his career nose-dived from there.

No, this was a “nothing” game but that goal by Simon Lappin played a huge part in my football following life and Matt’s, of course.