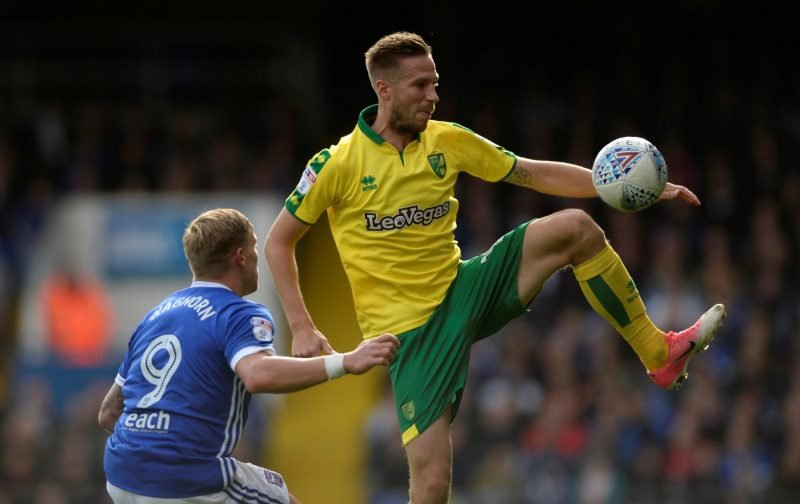 Norwich City welcome West Bromwich Albion to Carrow Road on Saturday but will still be missing a key defender in the shape of Jamal Lewis.

Lewis missed virtually all of pre-season with a combination of injury and illness and has suffered a set back in training this week due to a dead leg, said Daniel Farke when he spoke to the media at Colney on Friday lunchtime.

Lewis is first choice at left back when fit and last week’s replacement, James Husband showed that his form hasn’t improved over the summer.

The thought of Baggies’ winger Matt Phillips running at Husband makes me shudder, in fact, if he plays, I’d imagine that Phillips will have Husband on toast – prove me wrong, James!

There is another option though, in the shape of Marco Stiepermann who has shrugged off the knock that saw him withdrawn last Saturday at St. Andrews on 60 minutes.

At that time, Kenny McLean and Mo Leitner came on and helped turn the game. So, if I were Herr Farke, I’d be playing Stiepermann at left back and I’d put McLean on the left of midfield.

James Husband? He’d be left back in the changing room – sorry but “that’s not olden, that’s golden!”

Other than that little conundrum to sort out, there was more good news. Jordan Rhodes is fit and so is Ivo Pinto, who returns to first team availability for the first time this season. Should he play, it would give Darren Moore a first-hand look at a player he has been linked with making a loan move for.

I watched the first half of Forest v West Brom in mid-week and Forest were all over them, although the Baggies created two gilt-edged chances to score in that 45 minutes. Both were as a result of swift counterattacks and both were missed by Jay Rodriquez.

Having now recruited Dwight Gayle, they will become even more of a threat to the division. I suspect that playing them early in the season is likely to be better than in a couple of months time, when they’re fully up to speed.

You can check out the City team news at Canaries.co.uk.