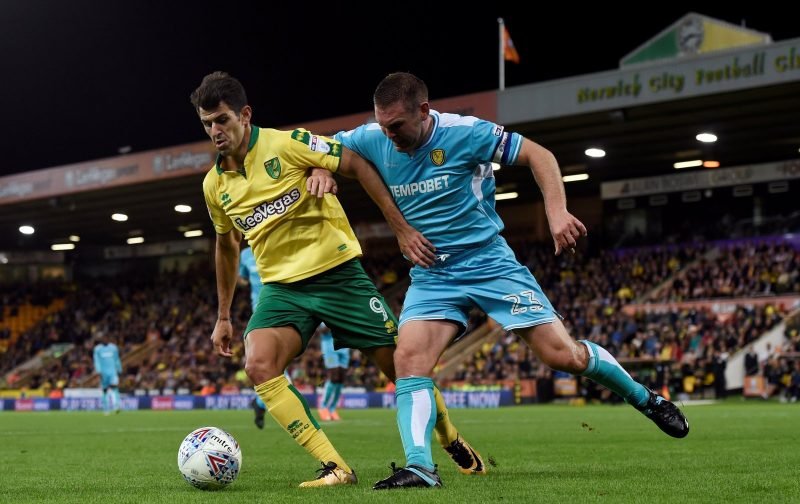 Nelson Oliveira seems certain to leave Norwich this summer as he wasn’t in Daniel Farke’s plans for the Championship this season, let alone the Premier League in the next.

Nelson’s infamous “shoot from anywhere” policy saw him replaced by Teemu Pukki last summer and that turned out rather well. He spent the first half of the season occasionally turning out for the U23s and never made the first team squad, not even once.

He was loaned out to Reading for the second half of the season and scored 3 goals in his first 6 appearances, including one against Ipswich  Town. He ended up with hamstring trouble, having also had his face stamped on by Tyrone Mings and ended up making 10 appearances for the Royals, with those hamstring issues ending his season prematurely.

There is a deal in place for Reading to buy Nelson and it seems they would like to buy him but they don’t seem to have any money at the moment according to local journalist, Jonathan Low.

Low took part in a Q&A on getreading.co.uk and provided an update:

Michael Hawkes asks: “Are we still signing Oliveria over the summer now Norwich have gone up?”

JL: “I think whether or not Norwich went up, they’d still be looking to offload him. He is clearly not in Daniel Farke’s plans.

“As I’ve said before, Reading do have a deal in place to sign him but as things stand they are not able to due to financial reasons.

“Until they get players off their books and off the wage bill, they are not in much of a position to sign any one.

“I’m sure they would like to sign him and he would like to be at Reading, but for the moment both parties need to wait and see if other developments can allow a deal to happen.”

So, it seems that they’d like to do a deal but need to sell first. Whether any other offers come in that interest Nelson in the meantime, could change the situation for all parties.

Norwich want to sell and Nelson did himself no harm in that Reading loan spell, surely there will be a few clubs looking at him, won’t there?