Norwich Back In The Big Time With Fifth Premier League Promotion 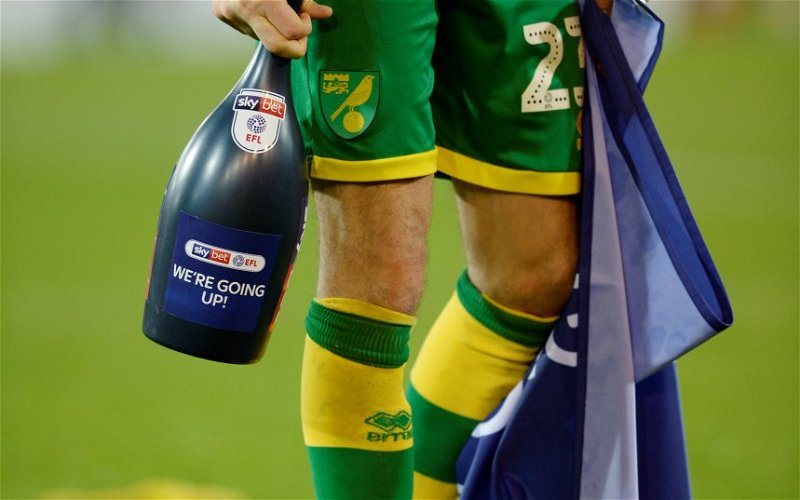 Norwich City were promoted back to the Premier League on Saturday afternoon without even kicking a ball.

The come back always feels sweeter! Been some character shown by everyone involved. Back where the club belongs. 💥 https://t.co/p5PpQGF89H

As has become quite common these last few weeks, both Swansea and Brentford fluffed their lines and were unable to beat teams much lower positioned in the table than they are. In Swansea’s case they were extremely fortunate not to lose at home against bottom side, Wycombe Wanderers. That meant that neither side could catch the Canaries and that now, only Watford could deny Daniel Farke’s men a second Championship title in three seasons.

Luton did Norwich a big favour by beating Watford in their own derby game and that meant that City’s promotion back to the Premier League, after just one season away, was confirmed three hours ahead of their own game against Bournemouth.

I’m not going to talk too much about the Bournemouth game because it was, perhaps unfairly, ruined by a red card for Dimitris Giannoulis in the 17th minute with the hosts already one goal up – another sublime team goal, this time scored by Emi Buendia. I assume that the referee, Graham Scott thought that Giannoulis was out of control when he went to tackle Ben Pearson.

However, after watching several replays, it was Pearson who was the aggressor, lunging in with a dangerous challenge that upended Giannoulis and caused him to come down on the Bournemouth midfielder’s leg. If you look closely, you see that Pearson’s face is brushed by Giannoulis’ arm as he falls and that Pearson initially clutches his face as though punched and that this is his primary attempt to con the referee. I know I had several replays to watch back and the referee didn’t but a yellow would have been punishment enough for each man, I’d say.

Farke shouted at the ref, “You’ve ruined the game”, I agree and a three match ban will really hurt for Giannoulis at this stage.

Anyway, enough said about that and the result.

The main thing to concentrate on is promotion and it is ours yet again. The fifth time that Norwich have achieved promotion to the top flight and of course, staying there is once again the topic for the next year.

Getting there though has been a sublime exhibition of often beautiful football from Farke’s team. I voted for my player of the season this week and had to really think about it. There have been so many dynamic, excellent performances.

Grant Hanley has been superb, a leader of men and a defender with the mindset of “none shall pass.” His partnership with Ben Gibson has been crucial to getting us to where we now are and if it hadn’t been for his injury, Gibson would be another candidate, as would Max Aarons and that’s before you mention Kenny McLean and Oliver Skipp. Both men have been so, so good in the centre of the park and it almost beggars belief that this is Skipp’s first full season in senior football.

Then you have to consider the forward line, Todd Cantwell has delivered moments of class throughout the season and it’s always hard to overlook Teemu Pukki and his 25 goals. I haven’t even mentioned our colossus of a goal keeper, Time Krul but I suspect he may come more into the reckoning for this award next season.

For me, the player of the season must be Emi Buendia. He has been an absolute joy to watch and  even in those odd quiet moments of a game, he is still the best player in the league by a mile. Ivan Toney supporters may well put their hands up and his current goals total could easily see him win the golden boot but a striker is only as good as those who supply him the ball, hence he’s not attracted too many headlines during the season’s run-in.

Buendia is a force of nature. His talent is there for all to see. Technically, he is the best player at the club and his accompanying work rate makes him something special, showing he is not just a flair player but a lad who is prepared to do the dirty work when required. He is just as likely to be making a block tackle or harrying an attacker in his own final third as threading a point perfect through ball to Pukki, or to take a high ball out of the sky and stroke it past a hapless goalkeeper. His lovely finish against Bournemouth was his 13th goal of the season.

The bonus of an early promotion is that Stuart Webber and the recruitment team know what league they will be in next season and to be able to plan accordingly. Planning will obviously have been going on for some months already but now, things can really ramp up as Norwich look to establish themselves in the Premier league.

I’ve already seen messages on social media from plastic fans I know of other, “bigger” clubs mocking our, in their minds, achievement and laughing at how we’re already relegated for next season. I imagine several pundits will think the same but in a slightly more measured way.

Webber and Farke have lifted Norwich up off the canvas and they will want to make sure that we are not a laughing stock for our next tilt at the Premier League. They have blown away the Championship in a season that has been difficult for everyone due to the global pandemic and the real crying shame is that the fans were not able to see it. Imagine some of the games we could’ve seen this season?

It will be down to Webber and co to supply the players to make sure that next season, it’s only tears of joy running down the cheeks of the canary nation.

As if you couldn't love @OnelHernandez23 any more than you already do! 😍 pic.twitter.com/ugIGkn1eWl