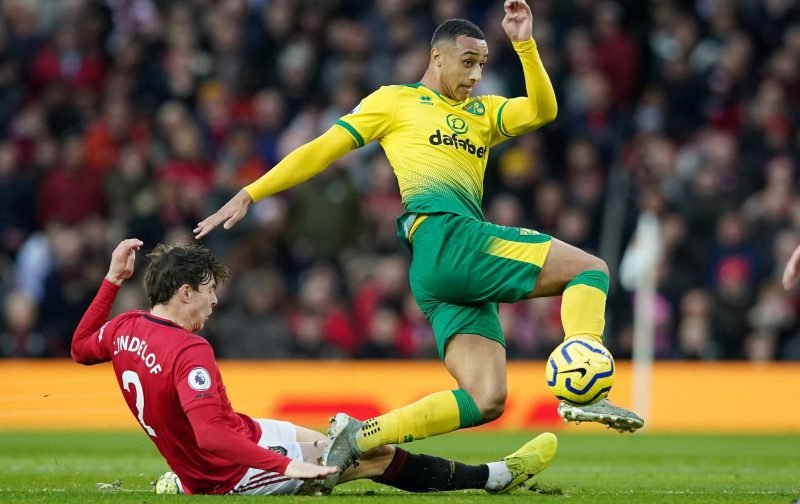 The question “Where do Norwich City go from here?” could easily be asked at this point after a crushing defeat by Manchester United at Old Trafford.

I think we all know the answer though, don’t we?

Manchester United away is one of those fixtures that City fans will always look out for on the day the fixtures are announced in June ahead of the upcoming season. Despite their indifferent form of the last few years, ever since Sir Alex Ferguson retired really, United remain one of the biggest clubs in the world.

A trip to Old Trafford is always an exciting day out for Norwich fans, full of “what if?” questions. Sadly though, despite watching them being torn apart by Manchester City in mid-week, the Red Devil’s produced a response for Ole Gunnar Solskjaer in what can only be described as a classic along come Norwich moment.

The reality of this Premier League season is that despite not winning enough points, the Canaries haven’t really been absolutely hammered in a game. Even on the opening evening of the season when City went to Anfield and shipped four goals before halftime, they weren’t totally outplayed and they created plenty of chances of their own, more than any other visiting team in the previous twelve months actually, but they were here.

From start to finish, United were simply too good for Norwich, just as they were at Carrow Road before Christmas. On that occasion, they were again on an indifferent run of form and I was surprised that they were as good as they were. Just shows you shouldn’t believe everything you read (except here, of course). Norwich barely had a sniff that day and the same thing happened at Old Trafford as history quickly repeated itself.

Lindelof and Maquire were barely troubled all day and Adam Idah was denied service of any kind on his big day. If Teemu Pukki had been fit, would that have made any difference? I doubt it.

Granted, David De Gea had to make a good save from Todd Cantwell with the game still level but once the hosts scored, there was little doubt that they would go on to win the game comfortably.

Idah will have seen the way that Marcus Rashford and Anthony Martial tormented the Norwich backline as the old stager, Juan Mata pulled all the strings, and hopefully, he will have even more of an idea of how he will have to develop to play at the very top of the game.

Norwich will (hopefully) have big plans for recruitment this month and the arrival of Ondrej Duda looks like being the first new face in at Colney in the next day or so. A new Number 10 will be a welcome addition but it will only be a loan because let’s be honest a player of Duda’s pedigree is not going to join a virtually relegated side permenently. Imagine how different the situation could’ve been had City not been cut adrift at the bottom, as they currently are.

The sight of Grant Hanley hobbling off will worry the Canary faithful as much as it will Daniel Farke. Ben Godfrey is due back in training next week but after a month out, can he really be expected to jump straight back in if Hanley doesn’t make the Bournemouth game?

Hanley had gone down earlier in the game with cramp, so fingers crossed his eventual substitution had more to do with involuntary muscle contraction than anything more serious. Whatever the problem though, the need for more central defensive reinforcements has again been underlined by this latest issue for Hanley.

I would expect that both Farke and Stuart Webber will have one eye already on the summer and our likely need for restructuring of the squad after relegation. To that end, any new centre back will probably be young and he will have the potential to improve.

Getting back to this game though, as I said, it’s arguably the first time that City have been completely out-played since they returned to the top flight. Against a big team, who have been struggling with their own problems, it was another reminder of how this young City squad simply haven’t been able to impose themselves on Premier League opposition often enough and they certainly haven’t been anywhere near good enough, often enough or for long enough in games, to get the required number of points.

As I’ve written many times, Norwich need to be firing on all cylinders all of the time to have a chance of beating teams like this and physically, that just isn’t possible every week with these players. It’s not an excuse, it’s a reality check because other than Emi Buendia, the rest of the City starting XI didn’t do enough.

They didn’t move the ball quickly enough to trouble, let’s not forget, a United side packed with International players, most of whom carry vast experience of the league and on their day, which was this day, they can all perform. The Canaries’ output would’ve needed to have been raised dramatically to keep up with them.

That’s the real disappointment for me though, because during the last six weeks, Norwich have played well more often than not, starting with the performance at Leicester. They should’ve/could’ve beaten Sheffield United, Wolves, Villa, Tottenham and Palace. Imagine if we’d won three of those games and maybe drawn a couple?

At the end, the City players almost seemed surprised at the support they were still given by the travelling Canary faithful despite such a below par performance and I hope that lifts them a little, knowing that if they ignore the noise from the numpties on social media then they will still know that the good people of Norfolk back them.

It isn’t their fault that the squad was not improved over the summer and neither is it Daniel Farke’s. That issue lies at board level and the desire/need to be a self-funded club but that’s a discussion for another day.

In the meantime, there’s the small matter of a visit from fellow strugglers Bournemouth next week for yet another must win game, we haven’t won any of them yet though.