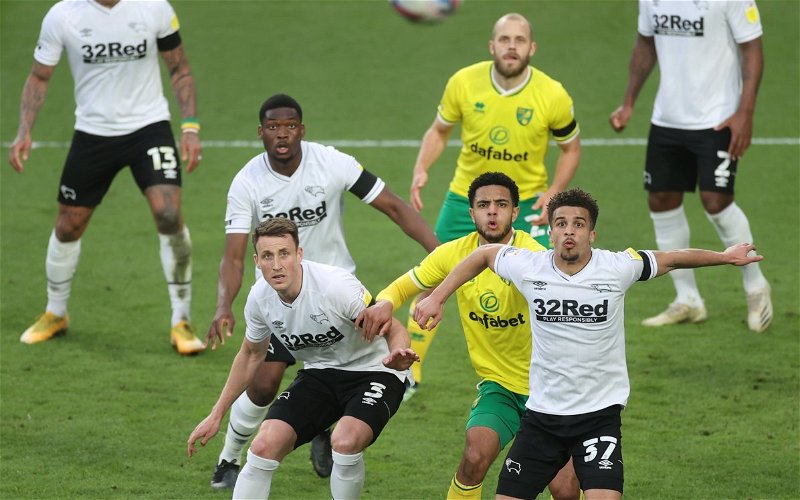 Norwich City tightened their grip on the Championship, moving to within just a couple of points of sealing a return to the Premier League at the first time of asking with a gritty 1-0 win over Derby at Pride Park.

It wasn’t anything like the 7-0 drubbing of Huddersfield, rather it was a hard fought Championship game like so many in the division are, week in week out. At this stage of the season, all that matters is winning and getting those points on the board. City could’ve been promoted today but big wins for both Swansea and Brentford meant that the champagne will be on ice for another week, at least.

The games are running out though and let’s be honest, promotion is basically done, isn’t it? Next weekend, Norwich take on Bournemouth at home before facing Watford just three days later, also at Carrow Road. Win those two games and the title will be ours.

On display at pride Park was the other side of Norwich City, the gritty team that are prepared to tough it out when required. The winning goal came from the sweet left boot of Kieron Dowell, who pulled rank on Emi Buendia to take a free kick in the 21st minute that ex-canary keeper, David Marshall didn’t even move for. It was top bin and expertly sent up and over the Derby wall.

You literally don’t save those.

Dowell had a sight of goal with another free kick that hit the side netting a few minutes earlier and I imagine he felt that had helped him get his eye in. That was his third goal in five games and he looks to be staking a serious claim for the number 10 position that is yet to have really productive incumbent since James Maddison left.

Things are definitely different this time around in the Championship with Norwich not scoring as many goals as they did in 2018/19 and not conceding anywhere near as many either.

Things have certainly tightened up at the back with the team clearly having a better balance, which is something that Newcastle manager Steve Bruce seems not to have really noticed.

The Magpies have have slipped into relegation peril of late with an awful run of just 2 wins in their last 21 games.

Newcastle legend, Alan Shearer has been having his say, as he often does, and there is an interesting article quoted by Football365.com.

“They will also need to repeat the attacking intent they showed on Sunday, because previously we have not seen anything like enough of that from them” Shearer said.

“Right from the start against Spurs their attitude was different.”

Newcastle’s seven-match winless run has coincided with the absence of 10-goal top scorer Callum Wilson, who is now available again after injury but Steve Bruce doesn’t want to listen to Shearer and he used the Canaries as an example of how if you play attacking football it will get you relegated.

He said: “I’m just going to use an example here, Norwich now, who are romping away with their attacking intent in the Championship.

“I’ve said since I walked through the door I want to try to get at teams, I want to play a little bit on the front foot. It’s very difficult in the big league and who we’re playing against, so you have to get the balance right to get enough results to stay that way.

“Yes, I understand Alan’s quotes – and of course he’s a centre-forward, so he wants to attack, he’s not interested in defending.

“For me, it’s all about the balance, especially in the Premier League.”

Bruce is absolutely the most under fire manager in the Premier League. Almost without exception, every Newcastle fan wants him to quit – things have been that bad this season.

What he says about Norwich last season, is probably correct but things are more balanced down here in the Championship, Brucey. You might need a bit more of that “balance” next season, Steve.