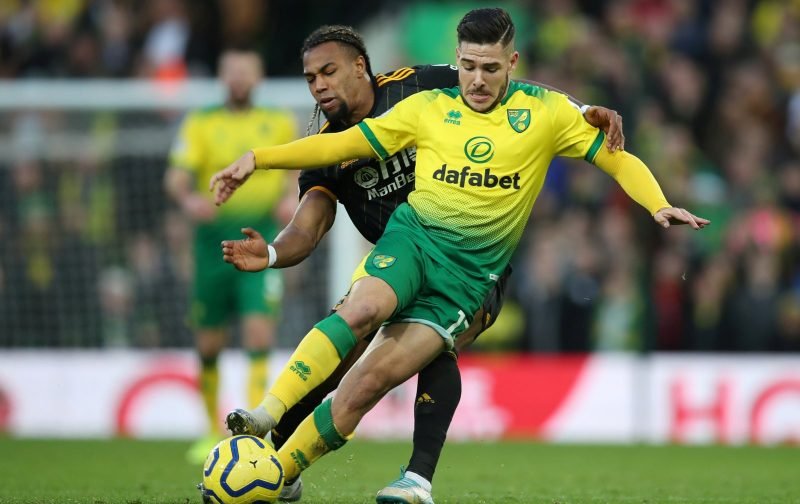 Norwich City have a host of saleable assets at the moment with the likes of Todd Cantwell, Max Aarons and, of course, Emi Buendia having been spoken about and linked by various media stories with moves back to the Premier League in recent weeks and months.

This week has largely seen stories concerning Emi Buendia moving to Arsenal dominating the Norwich City gossip columns but there was, a couple of weeks ago, a link that suggested Max Aarons was still on Manchester United’s radar.

Arguably, one of the best places to get reliable transfer information is The Athletic but it’s stories are behind a paywall not everybody wants to pay for it.

This morning, there are a couple of stories that mention Norwich players and the first is Aarons.

It concerns Manchester United, is written by Laurie Whitwell, and reports that United are indeed still looking to sign a right back to provide competition for Aaron Wan-Bissaka and promote competition, in a similar way that Alex Telles’ arrival did for Luke Shaw at left back in the summer.

United are pleased with the level of competition there and how Telles’ arrival has upped Luke Shaw’s performances. However, so far Wan Bissaka has had the right back role to himself and although he is an excellent defender, Ole Gunnar Solskjaer wants more from him in an attacking vein.

Max Aarons is certainly good on that front but it sounds like City fans can rest easy for now, with United seeking an experienced player who is ready to go, an established right back aged 28-30. Kieran Trippier had reportedly been top of their list for this month but Trippier’s recent 10 match ban for betting offences has scuppered that for now.

As it stands, Max Aarons does not fit United’s current profile for a new right back.

There had been discussions over a January deal for Trippier…#MUFC | @lauriewhitwellhttps://t.co/82K0RrsYo8

The other story is written by David Ornstein and mentions Arsenal’s interest in Emi Buendia.

The Gunners are being linked to playmakers across Europe at the moment, with the best paid player on their books, Mesut Ozil, still out of favour at The Emirates. Emile Smith Rowe has done well at number 10 but he is still very young and raw and Mr Ornstein says he is still seen as a prospect, a developing talent, who could benefit from playing back up to a more experienced attacking midfielder.

He adds that Buendia has been admired by Arsenal for the last eighteen months and that they continue to monitor his progress but that they know that buying him from Norwich this month, with the Canaries in the midst of a serious promotion bid, of which Emi is at the heart, is going to be very expensive and that they are not thought to be willing to meet the reported £40m asking price.

The Gunners are also unwilling to let Reiss Nelson or Joe Willock leave the Emirates in any shape other than on-loan, which knocks back the player plus cash stories that emerged earlier in the week.

It seems that Arsenal are prepared to wait to get the right player and that means that the Buendia saga could rumble on until late in the month or even into the summer. Other names mentioned are Borussia Dortmund’s Julian Brandt and Real Madrid’s Isco, Christian Eriksen(!) and Lyon’s Houssem Aouar but none seem any closer to pulling on a red and white shirt anytime soon.