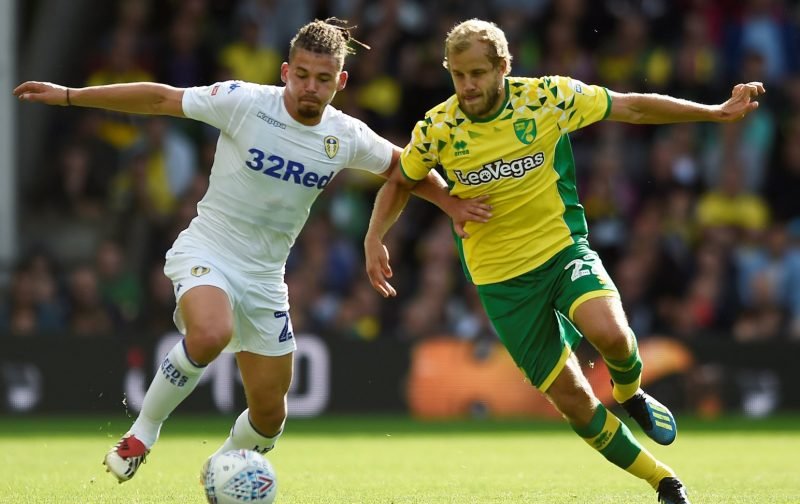 Going into this game, I was apprehensive. Not just because we were facing the league leaders but more because of the drab, lifeless performance that Norwich put on against Preston.

After watching the first 15 minutes against Leeds though, it felt like I was watching a different team. City were on the front foot and started fast.

They came out of the blocks at pace and went for the jugular, forcing a series of early corners and, I imagine, giving the visitors a bit of a shock. Certainly, the Leeds fans were quiet(ish), early on anyway.

However, after just 26 minutes, City were 0-2 down and the game had taken a distinctly different tone to the first quarter. The first goal came when Krul parried Alioski’s header but he got no luck (I’m being kind to him) as the ball fell to Klich, who just made sure he got a shot on target to open the scoring. That header by the way, was unchallenged and 14 odd yards out.

The second however, was another bad error by Krul, who was beaten at his near post by Alioski. It wasn’t on the same level as the mistake he made against West Brom’s Jay Rodriguez but it was another clanger from the new keeper. I’m beginning to think that there’s a reason that Chris Hughton let him go. Clearly, Krul has some pedigree but he’s showing levels of inconsistency at the moment. Hopefully, regular game time will get that former consistency back and he can lose the ring rust. The only other option is McGovern.

City actually responded to going 0-2 down quite well and saw a Pukki shot blocked wide and then Klose hit the bar with a header just before the break.

You’ve got to take your chances when they come though and despite these chances, City still went in at the break 0-2 down.

The same XI came out for the second half, which slightly surprised me as we needed to get back in the game and as we all know, 2 nil is a funny scoreline. If Leeds get the next goal it’s game over, if Norwich get it then it’s game on.

I gave Daniel Farke credit in midweek for the way he changed formation and made his substitutions to get a win over Preston. I’m not going to give him any credit here though, in fact, quite the opposite.

I get that he wanted to give the starting XI a chance to put things right at the beginning of the second half. They had, after all, finished the first half quite strongly but once we got to the hour mark and still hadn’t got back into it, then he needed to be changing things.

I was very surprised that he didn’t just go 3-5-2, like he did against Preston and get Emi Buendia on. As it turned out, Farke let it drift and on 67 minutes Pablo Hernandez scored a killer third.

Even then, Farke did nothing. He sat down and folded his arms as I watched in disbelief. Eventually, he got up and shouted a bit and clapped his hands but he looked like he’d given up and if I thought that, then what sort of message does it give to the players?

On 75 minutes, Emi Buendia came on to replace Mo Leitner, who I thought had actually done okay. He had certainly affected the game more than Louis Thompson, who stayed on the pitch.

The formation stayed the same though and then on 81 minutes, Marco Stiepermann and Dennis Srbeny, the goal machine, replaced Thompson and Jordan Rhodes, who is a proven goal machine.

Need three goals? Take off your proven striker and bring on Dennis Srbeny. Oh, and keep the formation the same.

Needless to say, this was completely ineffective and we ended up being embarrassed by Leeds.

I should say that Leeds looked very good and are the best team I’ve seen in the league so far this season but, having witnessed that opening 15 minutes, I feel this was a game that we could’ve actually got something from.

It matters not now though. The game is over and we lost, again.

Farke’s inactivity in response to the goals apart, there were a few players that disappointed me here. Ivo Pinto was caught the wrong side of his man (Hernandez) for the cross that led to the first goal and I’ve already spoken about Tim Krul.

Tom Trybull looked laboured as Pablo Hernandez just ran past him to open up the angle for his goal. It was the third goal and it was the killer for Norwich. It was a good goal but if you give a professional player that sort of room then he can do that sort of thing to you.

Louis Thompson struggled I thought, but it’s his first League game for a couple of years so I’m willing to cut him some slack. He just seemed a little laboured and perhaps tired(?).

Keep playing like this and there won’t be anything like the top six challenge that we are all so desperate for. In fact it could be quite the opposite.

If we lose to Cardiff and then Farke becomes the first City manager to lose to Ipswich in a decade then that will be it for him – among the fan base, anyway.