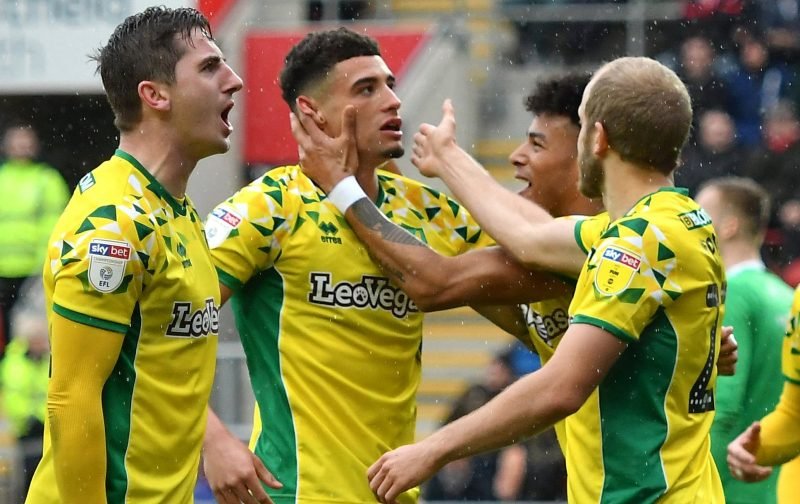 Norwich City got the first of this summer’s pre-season friendlies out of the way with a slightly feisty 2-2 draw against Arminia Bielefeld on Sunday afternoon in Gütersloh.

Here's the City starting XI and subs for our pre-season opener against @arminia in Gütersloh ⬇️#ncfc #CityOnTour???????? pic.twitter.com/HEWOtGikye

The Bundesliga 2 side opened the scoring on 31 minutes, only for Dennis Srbeny, with a very good finish, and Josip Drmic to make it 1-2 at the break.

As you would expect there were plenty of changes on both sides and the opposition had a man sent off on 36 minutes for a second yellow card. Before that though, City lost both Louis Thompson (hamstring) and Ben Godfrey (contact injury) to injury.

Double injury blow for City now as Godfrey limps off! ????

Drmic opened his Canary account when he successfully scored a penalty (didn’t he get the memo?) just before the break.

City had their chances to score again and Bielefeld looked dangerous on the break before some sloppy defending saw them equalise late on.

It finished 2-2 and was a useful workout against a team who are much further along in their pre-season than Norwich.

The injuries to Godfrey and Thompson are a concern, particularly Godfrey, who left the stadium on crutches. As for poor Louis, the guy just can’t catch a break, can he?

A bruising pre-season opener today. The Boss gave us an update on Ben Godfrey and Louis Thompson after the game ⬇️ #ncfc #CityOnTour????????

On the positive side though, new signing Philip Heise got plenty of game time after replacing Godfrey on 24 minutes. He looked pretty good too. He played on the left, with Jamal Lewis moving alongside Grant Hanley.

His passing was generally good and he took several dangerous free kicks as well. He looked like a very good, technical player – which bodes well.

In other news, there’s been a little bit of movement in the odds concerning Jarrod Bowen’s next club.

The Hull City forward, who can play anywhere across the front line, scored 22 goals in 46 appearances last season and was also named in the 2018/19 Championship Team of the season. He is in the final year of his contract, although the Tigers do hold a further one-year option. He grabbed 15 goals in 2017/18 and was voted player of the year by Hull fans and players too.

I’ve read a few bits and pieces that have linked Norwich to Bowen but nothing substantive enough to publish.

I did notice a piece from the Hull Daily Mail though that suggests Norwich City have suddenly become second favourites to sign Bowen, behind Southampton.

With what is still effectively two years left on his contract though, Bowen is likely to cost a fairly steep transfer fee and Southampton could surely outbid us, if they are interested.

He was one of the stars of the Championship last season and for that reason, along with being English, his fee could easily prove prohibitive to the Canaries and that’s assuming that Hull would be willing to sell him in any case.