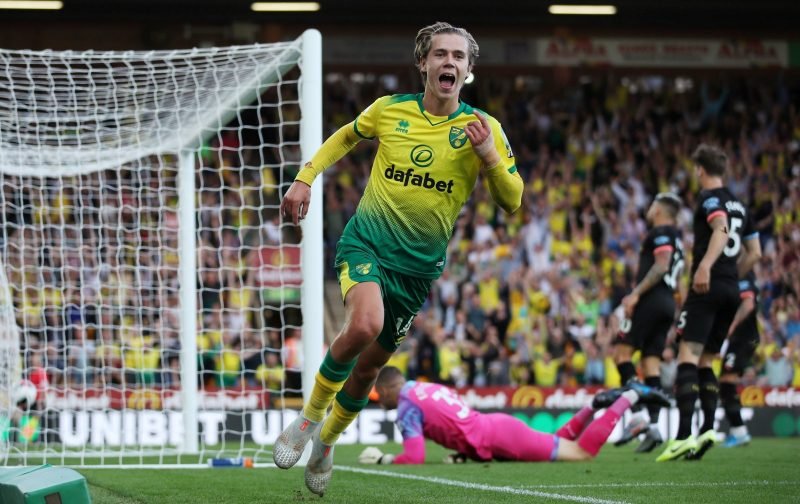 I’m not sure how much reading about football you’re doing at the moment. There are, after all, bigger issues in the world right now than sport.

Having said that, when I’ve watched clips of some great Norwich City moments over the last week, like Mario Vrancic’s last gasp equaliser against Sheffield Wednesday, Youssef Safris’s 35-belter against Newcastle and, of course, the Canaries’ 5-1 rout of Ipswich at Portman Road, I have realised that it continues to give me excitement and joy in these dark times.

Last Saturday, I watched the club stream of the playoff semi-final against Ipswich and even though I knew it wasn’t live, I found myself on the edge of my seat. I didn’t want to make a cup of tea during the first half in case I missed something, even though I knew all the goals were in the second half!

When Wes scored his penalty and Nathan Redmond made it 2-1, I actually noticed that it gave me goosebumps. Ridiculous, I knew what the score was going to be and it was five years ago, and yet, it still made me feel that way.

Like you, I cannot wait for a resumption of the real world. To be able to go out and get a pint somewhere together with my friends, to take Mrs T out for a nice bite to eat, to go to Carrow Road and watch live football again, it can’t come soon enough.

I’m trying to limit my news intake at the moment though, because it’s just so damn depressing. I’m rarely watching my Twitter feed either because again, it’s just awful.

I’m lucky enough to not have suffered with mental health issues during my life. Not to any real extent, anyway. Sure I’ve suffered from the stresses and strains that life puts upon us and the loss of a family member or a particularly difficult period at work have been as close as I’ve come to big issues with my mind.

Having said that, I looked at Twitter during first Brexit and now COVID-19 and I can see that it is not a nice place to be. I’ve seen lots of people simply say “I can’t handle this anymore” and just leave. The reality is that it is a small microcosm of life only and yet, it continues to be a miserable place at times.

It does have good news stories as well, don’t get me wrong but at the moment, I don’t need negativity because one thing we all need to do is to Stay Positive as the Hold Steady once sang.

I read an interesting piece of football related news on the Pink ‘Un this morning about the future of the transfer market and how it seems likely to retract considerably in the coming months.

The business of football transfers will continue though, just like the hiring of new staff in any business, Corona Virus or not. Norwich have already announced the signing of Danel Sinani on a free transfer, with the free scoring forward set to join in the summer.

That looks like a smart deal and at a fairly low cost as well, which is just as well as football clubs are losing money hand over fist. This is, of course, all relative when you consider the sums of money involved in the Premier League but the contraction of the football industry and especially for those clubs in non-league or the EFL, means that something is going to have to give.

The going rate for a good Championship player these days seems to be around £15-25m, which was an awful lot of money for players untried at the highest level. Now though, the clubs with the best Championship players are finding that things are getting tight, salary wise, and making a prediction, I can see that the best players are going to be worth nowhere near as much as they where before the virus.

The transfer madness all started when Barcelona told PSG, back in 2017, that if they wanted Neymar then they would have to pay €192m for him but they didn’t think they actually would pay that incredible sum.

PSG’s pockets are deep though and the owners, who happen to be the oil rich Middle Eastern state of Qatar, wanted a marquee signing and money talks, so Neymar went to Paris. That sparked a domino effect as the transfer market went crazy.

Liverpool told Barca that they now needed to pay €140m to replace Neymar with Philippe Coutinho and so, the knock on effects of the sale of Neymar da Silva Santos Júnior continued across the football world.

Suddenly, bang average players were worth £20m (Minimum) and with wages to match. Football clubs, bankrolled by satellite broadcasters in the UK and from across the globe, found that everything cost more. It’s a bit like being nearly fifty and not quite believing how much a cup of coffee costs these days, like me.

The virus will change all that though and the Pink Un’s article, which is based on statistics from Transfermrkt suggests that the Norwich City squad has lost a lot in value, going down by as much as 25% in the last couple of months.

A player’s value is only realised when another club actually pays that for him, of course. You can offer your ten-year-old Ford Focus for sale at £100k but that doesn’t mean it’s worth it, or that someone will buy it, does it?

The football landscape is going to look very different when lockdown finishes and the virus is finally beaten. As I wrote earlier in the week, which you can read here, the likelihood of life returning to normal until a vaccine is developed seems fanciful to me, in all walks of life including football.

There may well be EFL and non-League clubs lost forever due to financial issues because of the virus, so thank god, our club is a Premier League club, where the danger of losing your community’s club is at it’s smallest. Think about those at other clubs who aren’t in such a fortunate position though, who may well lose their jobs and the communities that might lose their football club.

Tough times and they look set to continue.

In the meantime, stay off social media, it’s not good for you.